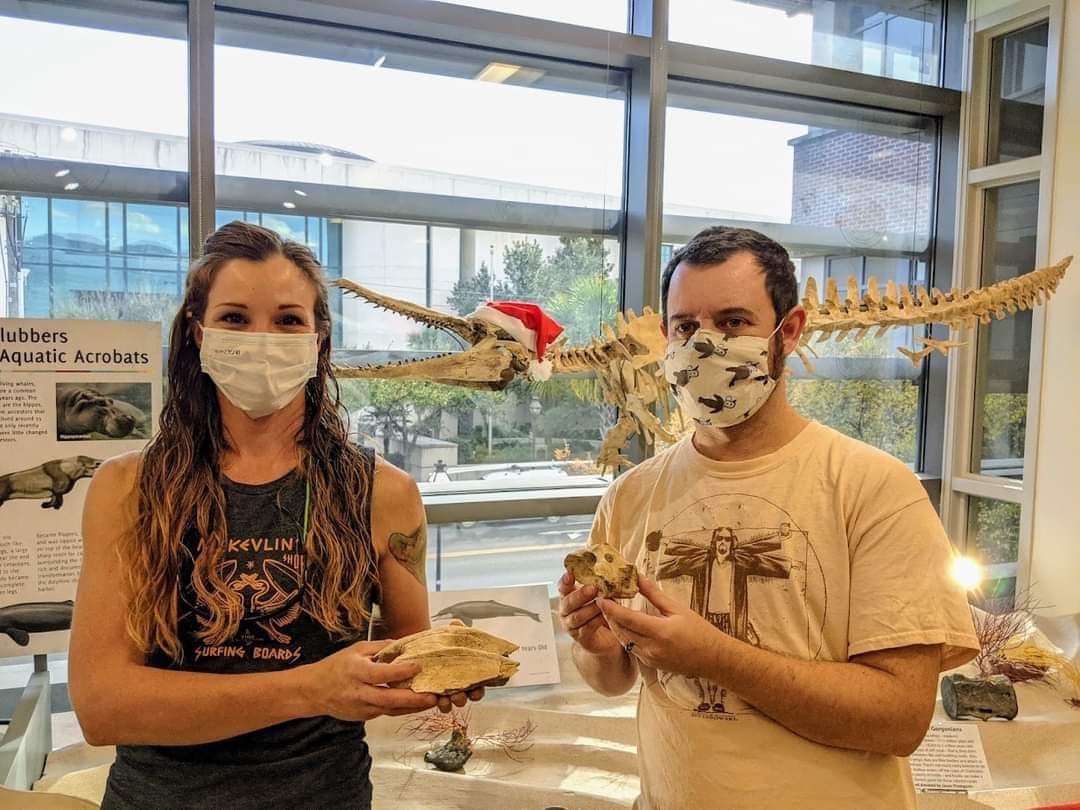 Hey everyone! Picture for attention! In spirit of the holidays, we have decided to hold another raffle for Dr. Bobby Boessenecker’s team at the College of Charleston’s Mace Brown Museum! This time though – We are going to be raffling off the following:

1st place – 5 HOUR CREEK EXCURSION (redeemable 1 time for use by single adult (can bring one friend) or family.

2nd place – An official signed print of one of Dr. Boessenecker’s own paleontology illustrations, a small sifter, and 2 pounds of premium micro-matrix

3rd place – An official signed print of one of Dr. Boessenecker’s own paleontology illustrations and 1 pound of premium micro-matrix

Tickets are $10 each! To enter just send money to
Venmo – @CarolinaMegHuntress or
PayPal – Stillsr@usca.edu with your name!

We will end the raffle on December 11th at midnight and will announce the winners on the 12th by 6pm! All proceeds will be donated to Dr. B’s team to be used towards funding future prep-work for fossils and research! I have included a few pictures for examples of Dr. B’s work! Let the fun begin! 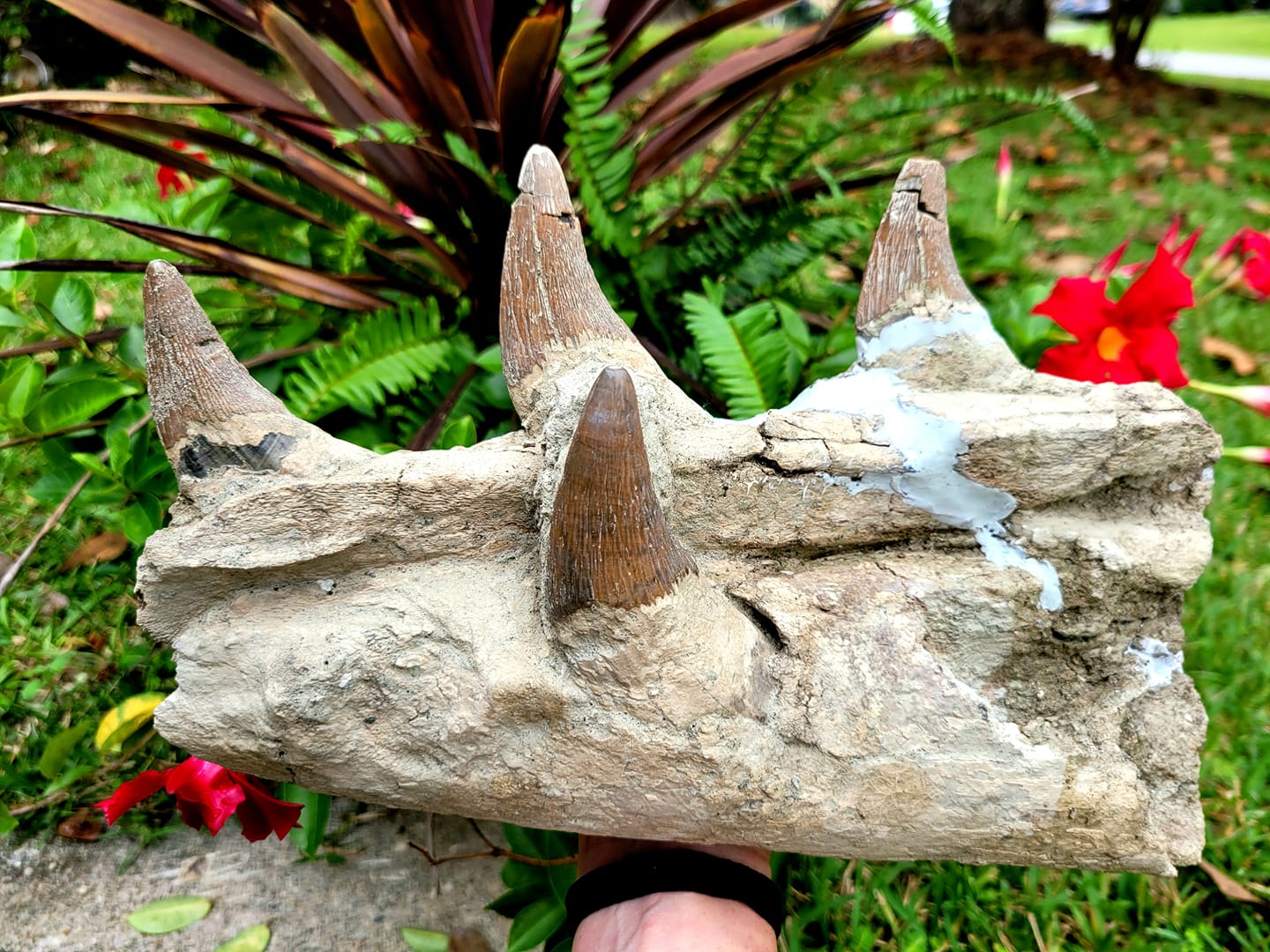 The Basilosaurids were a group of cetaceans that lived during the Eocene epoch from roughly 40 to 33.9 million years ago. Today, the remains of these amazing creatures can be found in Eocene exposures around the world including in the cement quarries in Harleyville, South Carolina. Once a tourist attraction for fossil hunters from around the globe, the Harleyville quarries are now indefinitely closed to public collectors. In the Summer of 2020, we were given a very rare opportunity to hunt the quarry along side the former Vice President of operations of the Giant Cement Quarry – Mr. Rich Familia. It was during this hunt that I discovered the remains of a beautiful pre-historic whale belonging to the Basilosauridae family with the identification being a tie between the Basilosaurus cetoides and the Cynthiocetus sp..I was walking along the edge of the Quarry on the 2nd tier when I noticed bone protruding from the wall – jagged bones indicating partial skeletal destruction by way of Quarry machinery. I called to Joshua and Rich to come over to the area as I began collecting the fragments of bone scattered amongst the limestone. We worked carefully but quickly as we knew whatever we could get out that day would most likely be all that we would be able to recover of the specimen. Amazingly, most of the rostrum and part of the skull had been knocked off of the wall in solid blocks that we were able to carry out with ease – one of which ended up containing both of the tympanic bullas (outer ear bones).For several hours the mine echoed with the sounds of our rock hammers and chisels hard at work against the limestone formation. By the end of the day we had collected over 5 gallon sized zip lock bags full of bone fragments in addition to 3 larger blocks containing larger portions of the whales’ skull and rostrum. No bones belonging to the whales postcranial skeletal remains were recovered though as they had already been taken away by the excavators in the days prior. But there were only happy thoughts for us as we knew how precious it was to have even found the remnants that we had been blessed with that day. Most often these situations result in only a handful of fragmented bone that leads to disappointment with no in-tact specimens – but not this day.Today, the specimen has been prepped (with over 100 hours logged in prep work I might add) with even more work left to do. The frontal most portion of the rostrum now sits on a shelf where I look at it everyday and think of how majestic this great creature once was. My favorite Fossil – The BasilosaurusSkye – The Digger 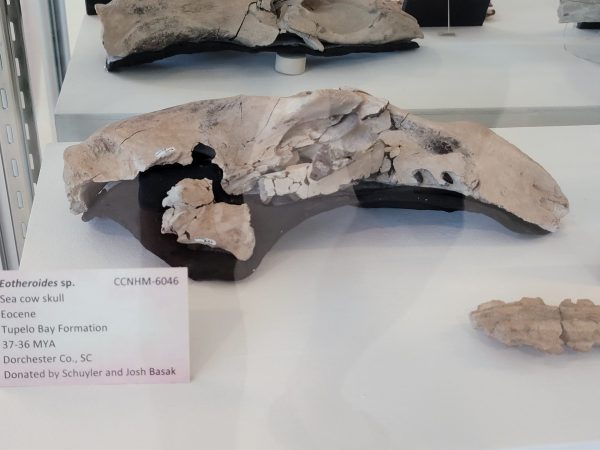 Walking along the bottom of the 80 ft deep limestone quarry at Giant Cement, Josh spotted a line of bone protruding from the floor of the mine. He bent over to investigate the bone, calling myself and Rich Familia – 25 year Vice President of Operations over to assist. We stood by and watched as Josh evaluated what he had found. Within a few minutes Josh had the area around the bone prepped out and within just 1 hour, he had the entire block removed and ready to carry out.

Upon arriving home we realized that the block had fractured, exposing teeth and jaw bone that did not look like anything that we had seen before. The teeth were certainly mammal, but they didn’t appear to belong to any marine mammal that we were familiar with. In fact, they almost looked like they belonged to some type of terrestrial mammal. We decided to send pictures off to Mark Bunce for further identification and were surprised when he called us within minutes of when he received the pictures. Immediately upon answering the phone we could tell that he was excited. Mark was whistling and exclaiming that we had found something he had never seen before and what appeared to be a partial skull belonging to an Eocene Sea Cow. For Mark to have never seen one before meant that this was an incredibly rare find and one that held a great deal of scientific value.

Almost immediately, the decision was made. Not only had Josh discovered an Eocene Sea Cow, this was only the 2nd to have ever been recovered in South Carolina, the most complete specimen ever recovered of its’ species, and to top it off, the only one that would ever become available for research to the Mace Brown Museum at College of Charleston.

The partial skull has since been donated and is now available for public viewing at the Mace Brown Museum at College of Charleston in Downtown Charleston along with many other specimens that have been recovered and donated by amateur paleontologists over the years.

Until next time, Happy Hunting!

Check out our store for merchandise, gear, gift cards and more! Dismiss